'A State of Matter' at the Henry Moore Institute, Leeds, UK

The exhibition 'A State of Matter' runs from 18th Feb - 5th June 2022 at the Henry Moore Institute in Leeds, UK and is divided into three rooms that represent the three states of matter, solid, gas and liquid.

The exhibition proceeds to demonstrates how glass can be explored in those three states via the utilisation of a range of techniques and processes. The exhibition also revives the argument surrounding glass as a material and on which side of the craft / art divide it lies. For me, there is no divide and I approach all works with the same attitude, seeking to allow the work to speak to me (or not) and then following that thread as I attempt to construct meaning.

I have chosen a handful of examples from the exhibition to photograph here, though I would recommend the reader to visit the show themselves rather than relying on my selection of representative works.

Elliot Walker was the winner of the Netflix series 'Blown Away' and manipulates glass with ease. His work 'Spillage' suggests pop-art style graphic representations of still life, with an interesting commentary on the materiality of glass and its solid/liquid, almost contradictory, existence. In this still life, which elements are solid and which are liquid? He manages to represent and contrast both states with a single material. 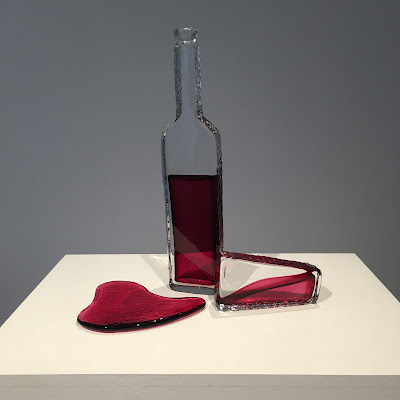 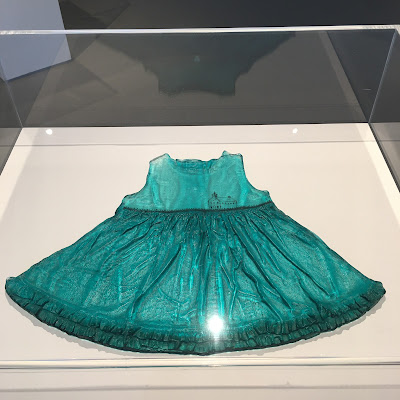 Untitled, 2007 - Silvia Levenson
Since I saw a large exhibition of Mona Hatoum's work at the Tate Modern in 2016, I have been entranced by the poignancy and poetry of her work. I love the way she balances often unsettling combinations of materials in relationships that seem almost inevitable. In the piece presented at the Henry Moore Institute, we are presented with blown glass forms that suggest internal organs with their haemoglobin colour and which, on closer inspection, appear soft, lightweight, and delicate. These are locked in zinc-plated steel cages and the intense contrast between the soft globular forms and the rigid steel box triggers a feeling of discomfort and pain. 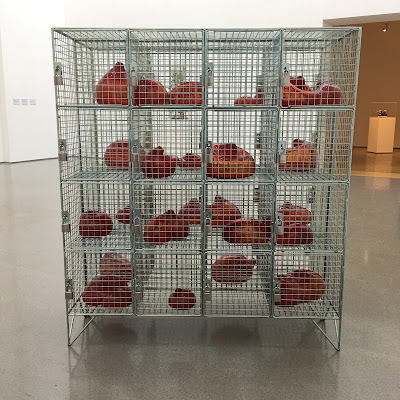 Cells, 2014 - Mona Hatoum
Czech artist Petr Stanicky combines a surreal biomorphic form with a car window, with the molten mirrored object appearing to take a bite from the car window and it this action that animates the arrangement and causes it to rise up from the plinth. Once again, we are reminded of the versatile nature of glass. The car window is familiar to us and therefore we read it as inert, while the biomorphic form takes on the appearance of a living form and we interpret the conjunction of the two objects as a 'bite' in order to make sense of the scene. 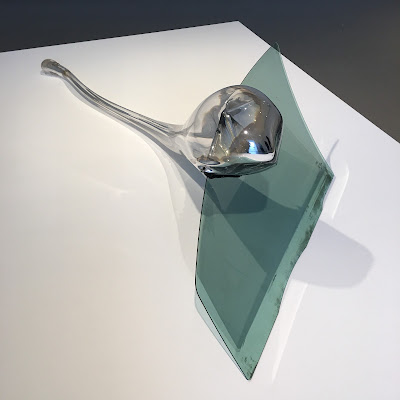 Mirror-Mondeo Bite, 2014 - Petr Stanicky
As an art student in the late 1970s I was introduced to conceptual art by the work of Joseph Kosuth. His work introduced me to semiotics, and how we construct meaning from what we see, how we develop preconceptions, how we understand what we think we know and how these thought processes stimulate the interpretation of the world around us. I was pleased to see his work included in the show and his work was the first and the last I looked at when I visited the exhibition. It was a great way to 'book-end' my visit and my reflections on the work of the artists represented. Often we are so seduced by the work of talented creators as we marvel at the incredible virtuosity and skills on display, that we forget to ask the simple questions such as what am I actually looking at? what are the materials used? What associations do these materials have for me? How have these associations been reinforced or subverted by what I have seen here?
As I left the building my head was full of questions about the work I had seen and what they suggest to me individually and collectively, and I couldn't ask more from an exhibition. 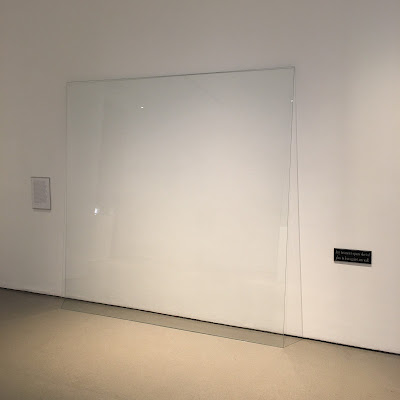 Any two metre square sheet of glass to lean against any wall, 1965
- Joseph Kosuth