Walking along Lai Chi Kok Road from the local Sham Shui Po MTR station I found the small art-space (100 foot park) sited in a shop window enabling passers-by to easily view the work being performed. There was even a long wooden bench available for interested parties to sit and watch from outside on the pavement.
On entering the shop I saw an empty white space with a light grey floor. A simple wooden stool had been placed slightly off-centre and around the stool a few objects had been left: a white rope, a roll of black adhesive tape and a pair of electric hair clippers. I had come tonight to see a performance created and performed by one of my students of the Visual Arts and Culture Programme at the Hong Kong Design Institute.
As the performance commenced, Bobby Pui was seated on the wooden stool with a young man sitting on her lap. She was wearing black; he wore white. A third person bound them together with the white rope and they both wore blindfolds. The black female figure could have been a shadow of the male character in white, unable to move without the permission of the white figure physically pinning her to the chair.
The man moved first. He removed his blindfold, untied the rope,  and stood up. Using the roll of black tape he formed a tape square around the stool as if creating a fence to hold the stool and its occupant prisoner. The male figure created boundaries for the female figure, dictating rules and parameters.
Bobby remained seated, motionless.
He walked around the space until he was standing behind her. He lifted her arms and as he arranged them into different poses, Bobby offered no resistance and allowed her arms to be placed in first one position and then another as if she was an automaton or a puppet to be manipulated by the male figure.

After that, Bobby got up from the stool and they both stood facing each other, although she still wore the blindfold. Even as they faced each other the male figure's dominance was demonstrated by the mask he had discarded and the mask she still wore.
The man put his hand to her face and forcibly pushed it away from him to the side. Was he punishing her? Or was he unable to look directly at her? Again and again he did this, several times until his movement grew more forcible and an audible slap was heard as his hand hit her face, knocking her head to the side. The man then left.
After a pause, Bobby removed her blindfold, picked up the hair clippers and began to shave her own head. She had shaved almost half of her head before the man returned and obligingly shaved the rest of her head. Once her entire head had been shaved, the man again left. She had begun to initiate an action but the male figure had briefly returned as if to remind her that she should rely on him to carry out any action.
Bobby put down the hair clippers, raised herself from the stool, broke the tape barrier surrounding the stool and left the scene. The performance was over and the female character was freed from confinement.
I attended the performance to watch an art student but in fact I saw an artist. I was taken aback by Bobby’s seriousness in the carrying out of the event. She displayed determination, imagination and creativity beyond her years. She has an abundance of energy and I can only look forward to her future career as it unfolds.
I was also impressed by the artspace:
http://100ftpark.wordpress.com
https://www.facebook.com/100ftPARK

It is another welcome addition to the cultural life of Hong Kong. I personally feel that it is small arts venues and groups such as these, which are the future of Hong Kong culture.


Photographs below courtesy of Ken Jai and Yu Ying Nai. 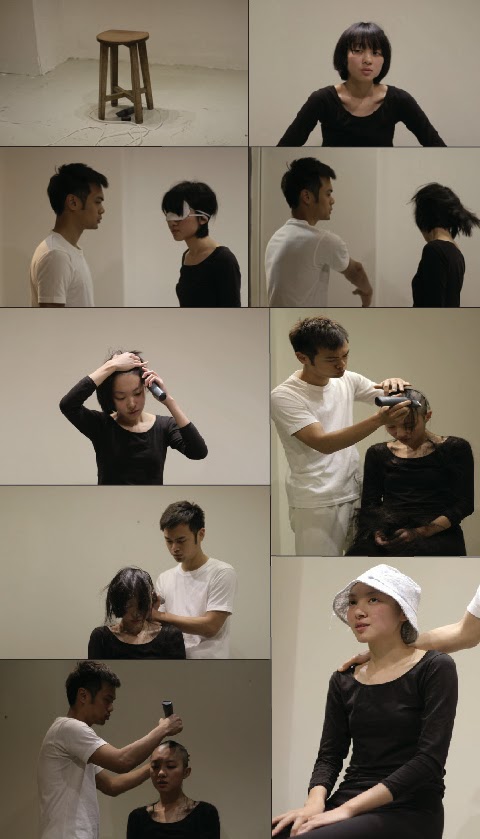