I edited together footage recorded during the recent drawing day on Cheung Chau and edited 2 short videos outlining the construction of two drawings.

These drawings are the latest in an ongoing project that investigates the collaboration between a human (me) and nature and as active participant. Together we create an image through dialogue. As with all conversations, sometimes one party dominates, when they have a lot to say, while the other listens, sometimes it is a balanced two-way interaction.
I will post more updates from this project in future, hopefully recording the progress of the investigation.

The recording can also be viewed on my youtube.com channel here: https://youtu.be/ZZLeJxAsITg


The recording can also be viewed on my youtube.com channel here: https://youtu.be/g8OmGnUXbss


This project was referred to in the blog of Garry Barker, artist and educator in Leeds, UK. Garry goes into detail about the use of frottage in art, in great detail and great eloquence here.

I have edited a recorded version of my performance 'No holiday' that formed part of my preparation for participation in two performance art festivals, the Duration and Dialogue II Festival in Toronto, Canada and the Inverse Performance Art Festival in North-west Arkansas, USA.

This 33 minute version was recorded on Cheung Chau Island in Hong Kong.

Currently in the planning stage are further episodes of the 'No holiday' performance, including locations in the UK and Venice in Italy. News of these developments will be written up later in the year, as they happen.

The recording can also be viewed on my youtube.com channel here: https://youtu.be/R4V5faOIX1w
Posted by Patrick S. Ford at 8:30 AM No comments:

On Sunday 7th May I gathered my prepared materials and walked down to Nam Tam Wan to take a close look at which rocks could be suitable for the next stage of my drawing project.

The small tests I had conducted previously showed promise and I had intended to build upon those results, I just didn't foresee that it would take so long to move the project along. A conference paper, Dada collage, a digital print and various other things came onto the agenda and pushed the drawing project back. However, putting that delay aside I could now turn my attention to drawing the rocks down at the little bay near my home.

I began with a roll of Chinese calligraphy paper, which I have found to be particularly good at picking up the texture of surfaces when creating frottage images. Sometimes the paper may tear, especially when enthusiasm urges me to work faster and so these tears will need to be repaired later at some point.

Several stones picked up on the beach helped to keep the paper in place and prevented the wind from blowing my work away. I used sticks of willow charcoal to transfer the rocks' texture and as I worked I snapped the charcoal into shorts sticks of approximately 2 inches so that I could slide them across the surface of the paper to create soft swathes of texture on the paper.

When the first drawing seemed to be resolved I took a look at it and thought that it didn't require any further working back home, although I will look again another day to see if my opinion on that has changed.

The second attempt was with a larger piece of paper. This paper was thicker, smoother and had a waterproof covering on the reverse side. This had advantages and disadvantages. The advantages were that the paper was more durable, was easier to pin down using the rocks and was easier to push the paper further into crevasses to pick up the texture. The disadvantages were that the smooth surface texture of the paper meant that it was more difficult to create an organic surface of marks, the waterproof covering on the reverse side formed a barrier, making it more difficult to 'feel' the rocks' texture and the pure white colour of the paper was much 'colder'. I was pleased with the results of this second attempt too, although I will certainly need to work again on this one later. It was satisfying to work on a larger scale, it felt as though I was beginning to get somewhere!

Although it was quite a hot day, the wind that threatened to blow away my paper, also cooled me down and stopped me from over-heating. 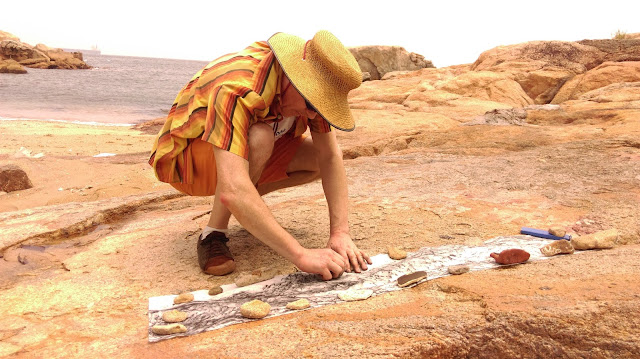 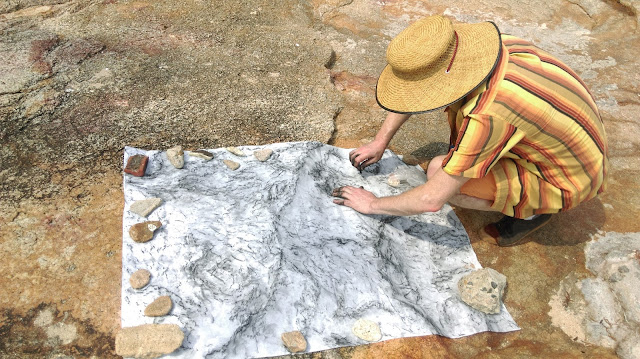 This project was referred to in the blog of Garry Barker, artist and educator in Leeds, UK. Garry goes

into detail about the use of frottage in art, in great detail and great eloquence here.
Posted by Patrick S. Ford at 10:49 PM 1 comment: