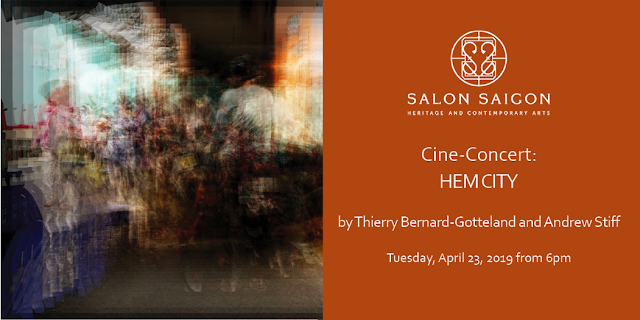 On Tuesday 23rd April Salon Saigon presented 'Cine Concert: Hem City' by Thierry Bernard-Gotteland and Andrew Stiff, both Lecturers at RMIT University here in Saigon.
The 'Hem' in question are the ones to be found in District 4 (Hem being the local term for the narrow, often meandering alley-ways to be found all over the city).

District 4 is an interesting phenomenon, delineated by rivers that separate it on all sides from other districts thereby effectively creating an island. The rapid development of the city that has been witnessed across Saigon has previously by-passed this area creating a pocket of residential and commercial buildings that looked back over its shoulder to the past. The district was a little down-at-heel, insalubrious, frequented by shady characters.

However, more recently there has been modern encroachment around the fringes as apartment complexes sprout up, especially along the riverfront facing District 1.

Andrew Stiff has been focusing on the Hem of District 4 as he 'investigates the process of collecting, archiving and (re) producing physical and ephemeral data from the urban realm' *

Thierry, on the other hand, specialises in experimental design and audio production. He is 'investigating through the lens of context/content about audio driven experience in installation and performance art'. *

For 'Hem City' these two researchers came together to create a live performance in which both the visual and audio aspects of the work would be manipulated in an improvised way for the audience using advanced software.

Luckily I had visited District 4 in the past and had spent an interesting morning wandering around, and temporarily getting lost in, the fascinating and seemingly semi-private spaces of the Hem. This meant I was able to use my personal experience as a point of reference for what I subsequently witnessed in the performance.

Thierry and Andrew sat on the right-hand side of the room, each with their Mac laptop as the film unfolded on the screen. The film itself unfolded with an initial shot of a table set up in the street, possibly as a makeshift drinks store for passersby. As the shot pulled back, away from the table, motorcyclists rode past across the frame, interrupting our line of sight. At first the motorcyclists were solid and well-defined but very soon others rode past and these were less distinct, semitransparent, diaphanous in nature.

Throughout the film this transformation recurred, people working or walking in the Hem appeared at first as well-defined figures but almost immediately began to lose their definition and sense of form, becoming shadows or ill-defined reflections. As figures passed through each scene they appeared to leave a trail of their own presence behind them as boats leave a wake in the water they pass through.

As I recalled my own visit to the District 4 Hem, the activity I had seen there formed similar impressions in my memory. The images and details of the things I had seen were now reassembled in my imagination but lacked chronological order or appropriate relationships to each other. In a sense, the film I was watching could easily have been an attempt to recreate the multilayered, yet slightly disorganised images constructed in my own recollections.

Similarly, the sounds played around with the senses. At first, sounds retained a relationship to the situation which created them but as the film progressed, this connection faded and from then onward a similar deconstruction took place (as had occurred with the images). Sounds were heard after or before the points of origin could be seen or the location of the sounds' origins exchanged their positions, approaching towards us (becoming louder) or receding (becoming quieter). Eventually, many of the sounds were gradually transformed further and lost their connection to any recognisable activity. These new sounds spoke to the chaotic nature of the district, the hustle and bustle created by this intense concentration of people going about their business on a daily (and nightly) business.

The performance was challenging and that made it enjoyable for me. Too often I see exhibitions of 'safe' work, or 'safe' performances in which no risks were taken. As an artist I try to work out of my comfort zone as often as I am able and I enjoy seeing the work of others when I sense that the artist who created it has taken a similar approach. I like to see this also in performance art. In the theatre we are used to seeing 'professionals' who have conducted exhaustive rehearsals in order to remove the unexpected but for me unpredictability is one of the important characteristics of performance art.

By working without a script Thierry and Andrew took risks, relying on their intuition and judgement. Sometimes there are repercussions to this approach. At one point the huge files being manipulated by Andrew crashed on his laptop. For me this was no disaster, it merely underlined exactly what was occurring live in front of me, and how he and Thierry were working without a safety net.

For art to develop, first you need to do something. Most ideas emerge not fully formed (at least the best ideas do in my opinion) and they need to be worked on. I've lost count of the number of times I've seen pieces that would have benefitted from a little more development. However, for performance, the only way to develop it is to do it. What happens, happens and this is the crucial feedback that begins the development.
As the great artist Joan Jonas said "You don't know what you're doing sometimes. You just begin". **

I thank Andrew and Thierry for providing an opportunity for me to witness the development of their work.

For the 2018 edition I submitted details of my ongoing performance series 'No holiday', with the accompanying photographic image focusing on the Venice episode of the series that was filmed in the Dorsoduro district of the city in August 2017, during the Venice Biennale.

It was great to receive the e-version of the almanac and see the work listed among the other engaging work performed by performers / performance artists from around the world. 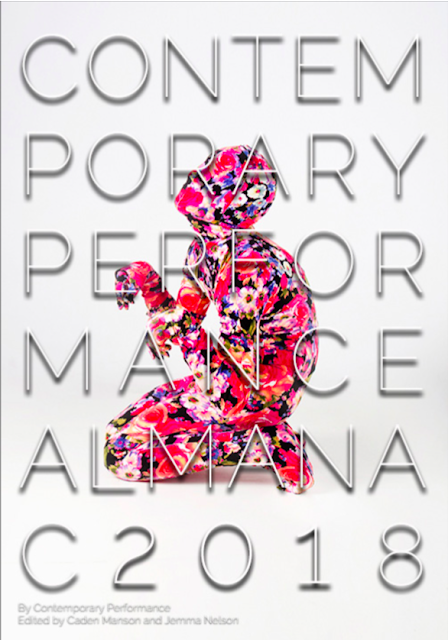 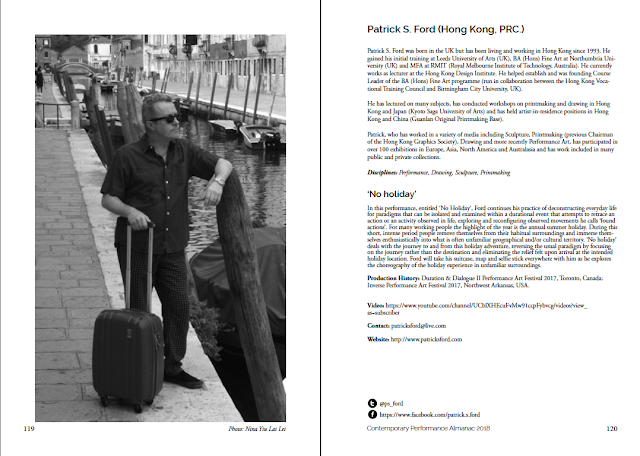