In the latter part of February this year I received an email from the UK Drawing Research Network, conveying news of an upcoming exhibition and symposium, entitled 'Marks Make Meaning: drawing across disciplines' to be held at the Brighton Grand Parade Gallery in the UK.

Part of this event comprised a collaborative drawing performance organised by Professor Paul Sermon and Jeremy Radvan of Brighton University, and this drew my attention immediately as it pulled together two of my major current interests, namely: drawing & performance.

Subsequently, through email and Skype conversations with Paul I was able to arrange to be the collaborative partner for the performance which was scheduled to occur just prior to the exhibition symposium in the Gallery on the afternoon of Tuesday 13th March.

Paul has been working on this project for some time and he explained to me how it works. Two locations are connected via Skype and this link is used to visually connect two sheets of paper through the use of mobile phones, computers and a projector. In each location participants begin to make  a drawing and the resulting images are combined by projection.

On the evening of Tuesday 13th (at around 9:00pm) we established a connection and spent around 45 minutes setting up and checking the system, this was done in the form of a workshop with the help of students from Brighton University.

In the UK a large sheet of paper was fixed vertically to a surface in the Gallery and the image of this was beamed back to Hong Kong via Skype. In HK, Nina Yiu and I had a sheet of paper taped to the floor and a mobile phone set-up directly above it so that any resulting image would be beamed back to the UK and projected onto the vertical sheet of paper in the UK.

Whatever was drawn on the paper in the UK and also in HK, the two sets of images would be combined by the projector, with only a fraction of a delay experienced by both participants. 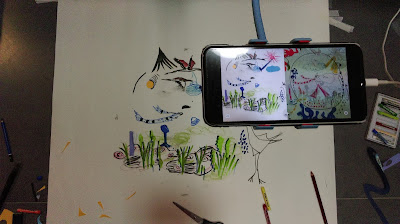 
At 2:00pm GMT (10:00pm HK time), we began working on the first of three 20 minute sessions entitled: 'Connected Cities', 'Water Body' and 'Eternal Migration'. Guests and attendees of the drawing symposium were invited to draw on the paper, either instigating a new image or reacting to something we had drawn.

In HK we had assembled a range of mark-making materials and other materials such as string, yarn, ribbon, coloured paper & scissors, which could be laid onto our horizontal sheet of paper. At the end of each 20 minute session, we simply cleared away the loose items and taped a new sheet of paper directly on top of the previous one, taking care not to disturb the mobile phone positioning. 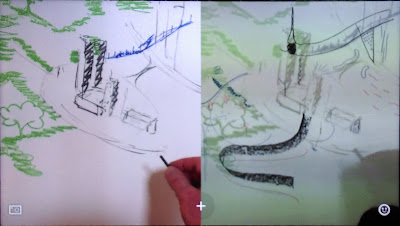 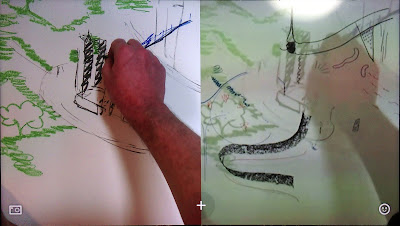 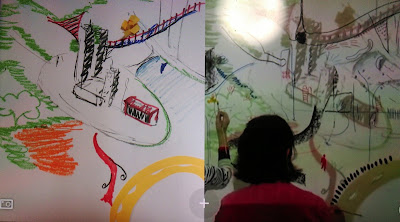 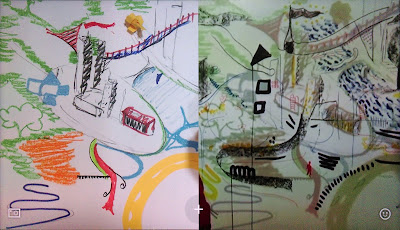 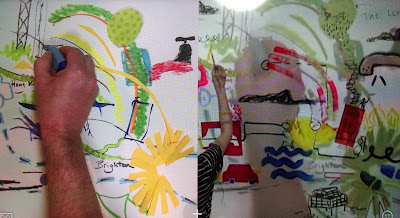 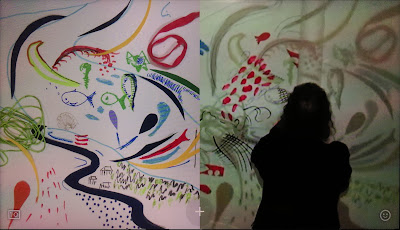 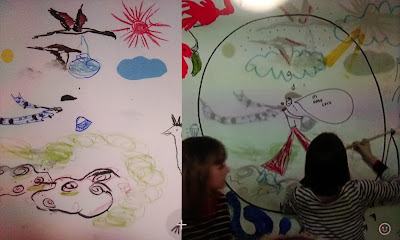 Documentation of the whole event can be found here:

Part of the 2 hour event, seen from the Hong Kong side, was edited into a short video: