On the morning of Sunday 23rd February, I once more travelled to District 1 of Saigon accompanied by Nina, Yiu Lai Lei to mark the occasion of the Terminalia Festival 2020.

To participate in the festival this year Nina and I chose to follow the previous routes of two canals in the city. Most of the city's canals have been since filled in and transformed into streets and boulevards.

The main route follows the edge of a canal that used to carry trade right up to the walls of the old citadel, which was the focus of last year's Terminalia walk. This canal, now transformed into a 'Walking Street' called Nguyen Hue (named after the historical figure), ends at the main road running along the bank of the Saigon River. 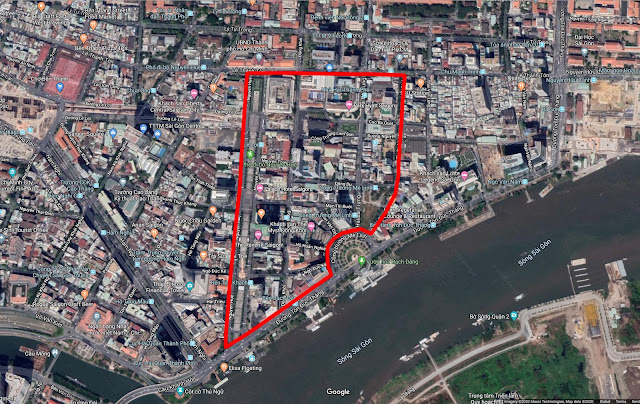 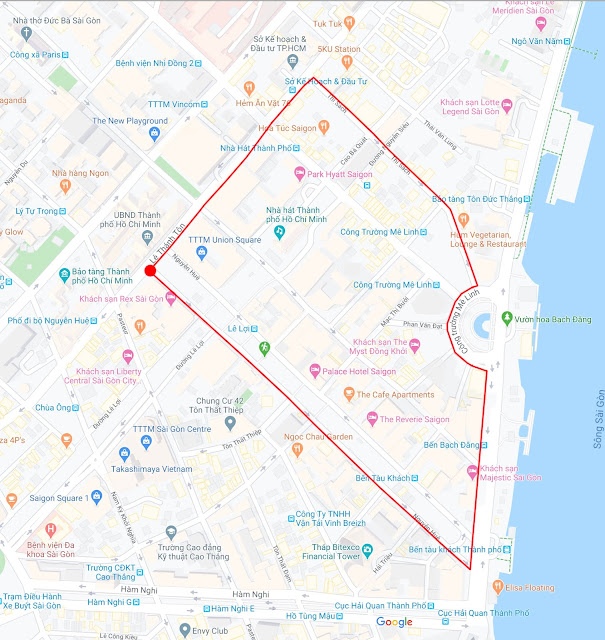 Nina and I began our walk at the junction of Nguyen Hue and Le Thanh Ton (almost opposite the City Hall) and began walking South East towards the river. As we prepared for the walk, we first looked at the City Hall that stands roughly where the wall of the citadel would have stood and tried to imagine ships and barges bringing goods up the canal from the river. As we considered this bustling trade, a road-washing truck made its way along the street, spraying water in all directions. It appeared to be pushing the water before it as it progresses, almost like a bow-wave. As the truck passed it left a film of water that spread across the road surface like a shallow wave, providing a poetic reminder of the barges that used to make their way up the old canal, heavily laden with goods from other parts of Vietnam or from overseas. The water quickly evaporated in the heat of the mid-day sun. 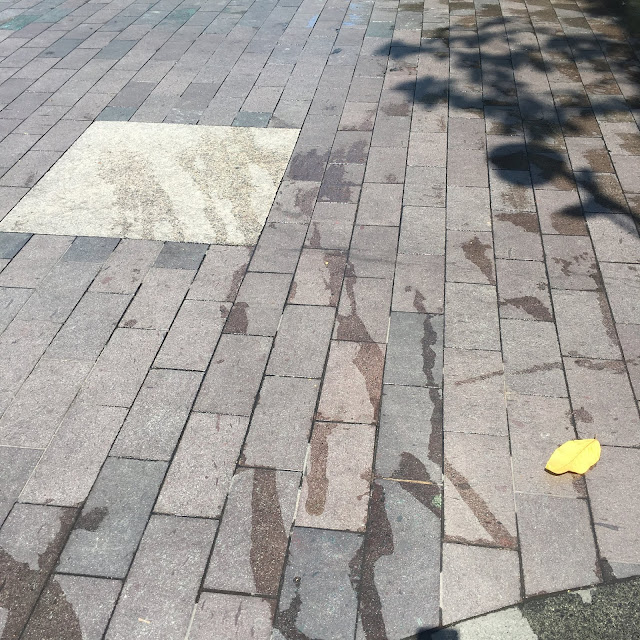 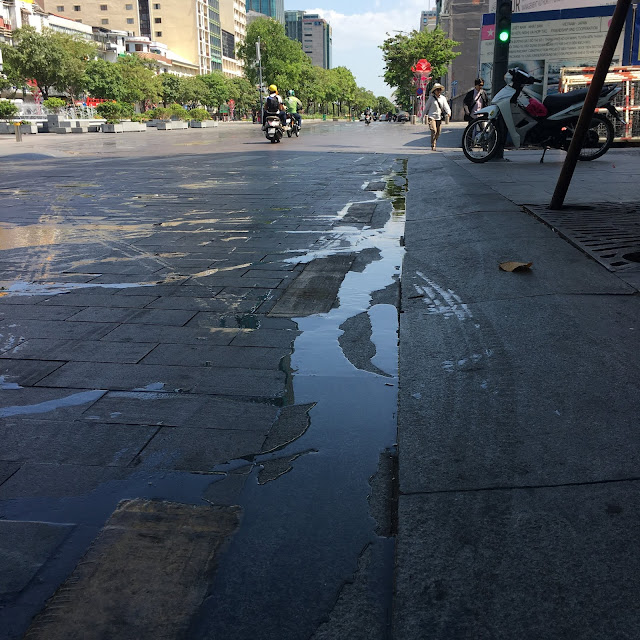 The shops, cafes and restaurants along Nguyen Hue are stocked with a variety of products such as: 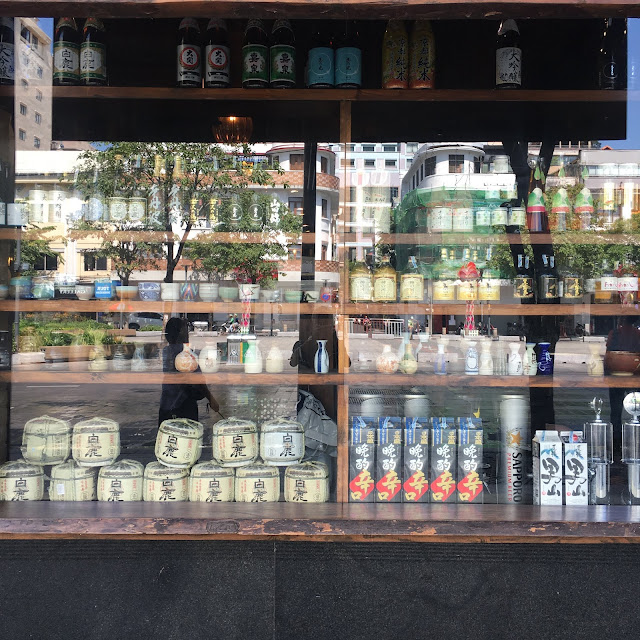 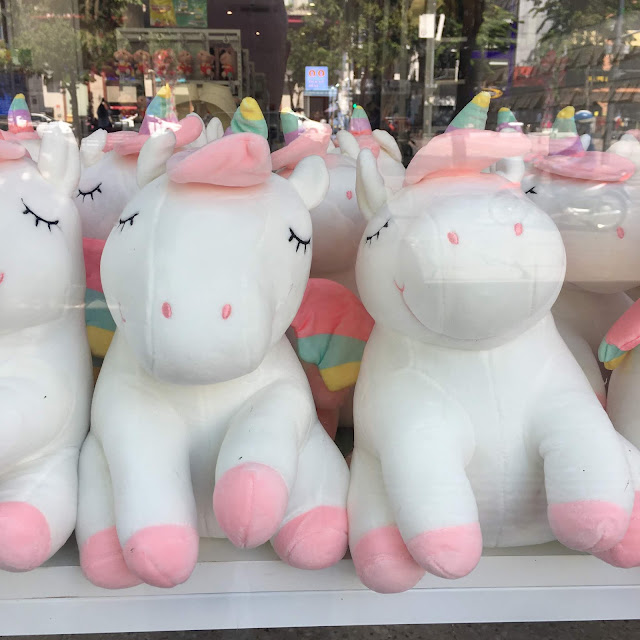 A little further on we found a white, modular structure reminiscent of Metabolist Architecture or, perhaps more appropriate for our canal setting, stacked tea chests. Following this line of thought they have obviously been emptied of the tea and ready for their return or to be used for some other purpose. 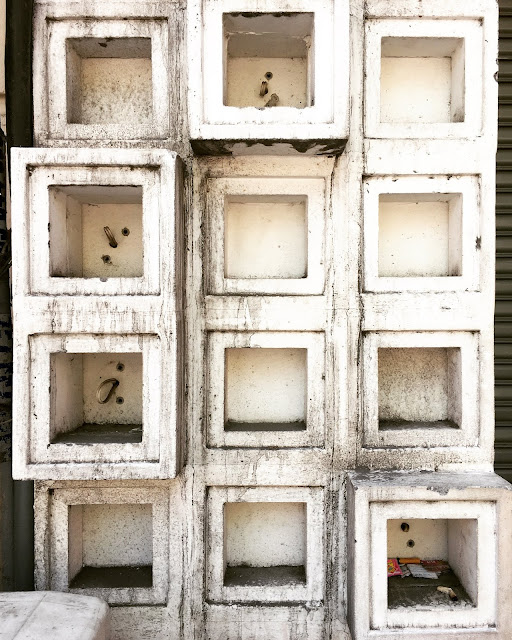 We found a quick-fix 'No Parking' sign that, in the present context, took on the form of an inventive sailing boat ready for launch with its small, white single sail. 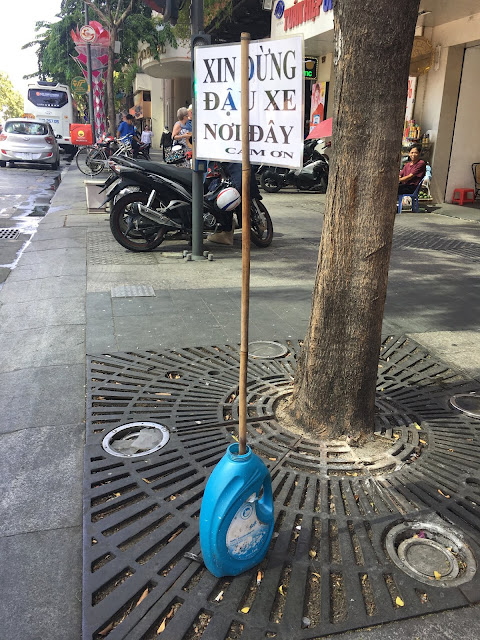 The links to trade continued, rows of sewing machines cast our minds to the silk trade, bearing in mind the strong local tradition of silk weaving. The terracotta container also spoke to a possible trade in oil or wine. All connections such as these suggest international trade between cultures. 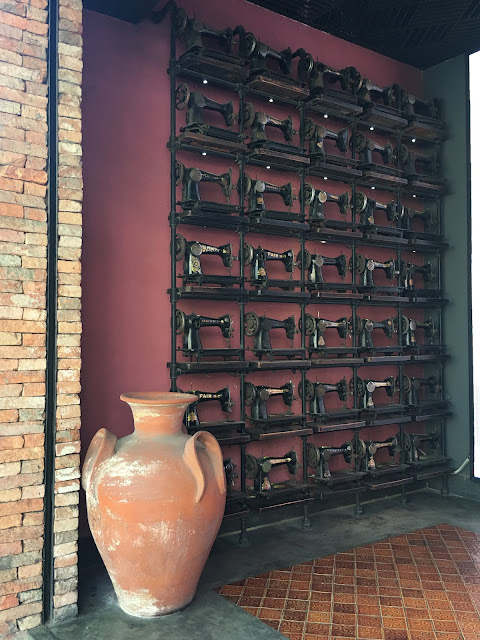 The visual connections to France are never too far away in Saigon. This window is an absolute delight.  We wondered what the room inside may have looked like...an office perhaps? 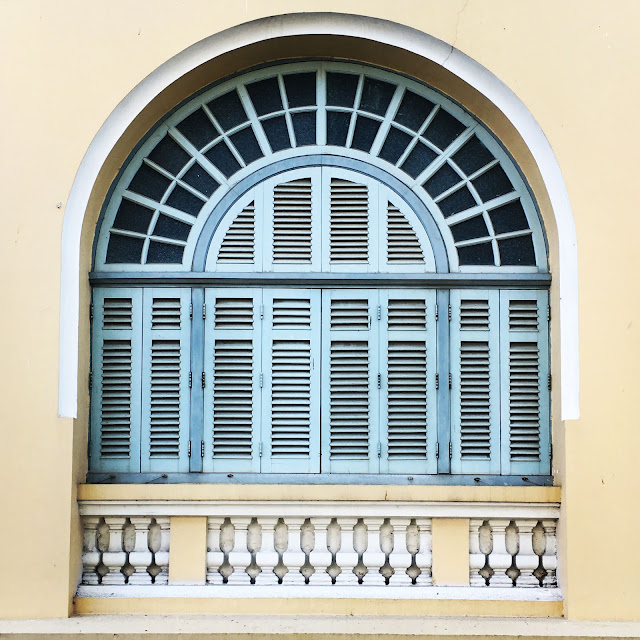 At the end of Nguyen Hue the road merges with Duong Ton Duc Thang, which runs along the bank of the Saigon River. We imagined the ships and barges that would have turned into the canal from the river and in sympathy with our line of thought we saw the 'Elisa' floating restaurant. It appeared to be moored in readiness for the disembarkation of passengers or the unloading of precious goods. 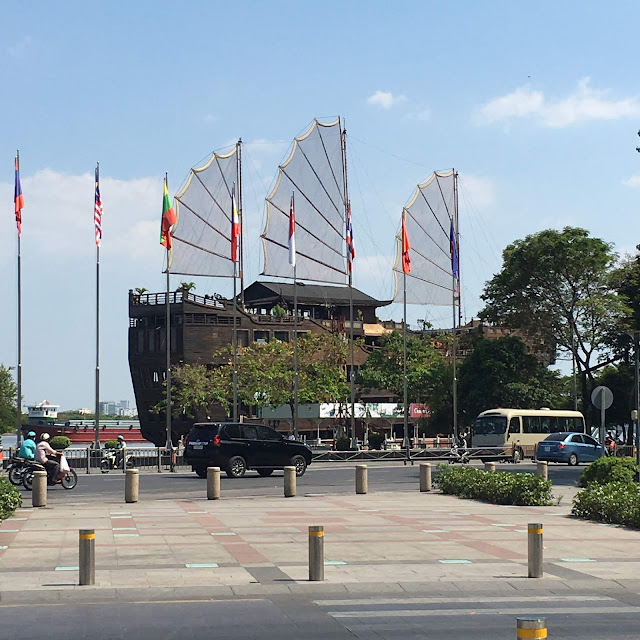 There are several well-placed Hotels along Ton Duc Thang, with rooms facing onto the river and many of them feature restaurants and splendid entrances enticing clientele to visit. At one establishment we found a monument to a Merlion, a mythical creature half fish and half lion, though this particular example seemed more agile, graceful and less top-heavy than the one found in Singapore. As we passed it was enjoying a constant, cooling spray of water. 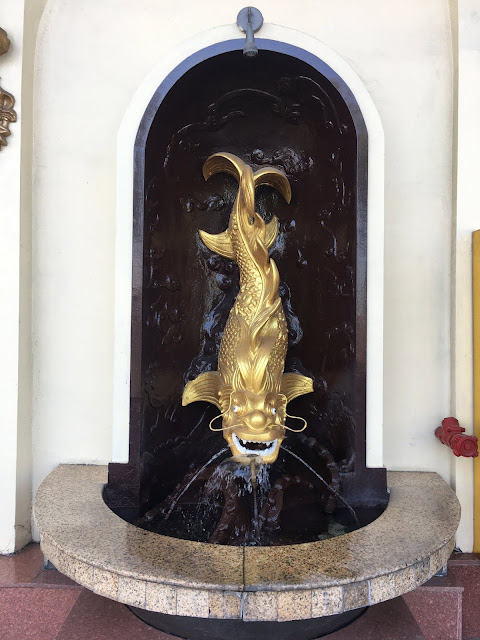 Suddenly we were confronted by a large, fierce-looking stone lion. At first we assumed this was a Chinese lion but close by we found the Venezia Restaurant and decided this guardian must be the Lion of St. Mark, though this unfortunate creature had lost its wings and had also misplaced its copy of the Bible somewhere. No wonder it looked so annoyed! 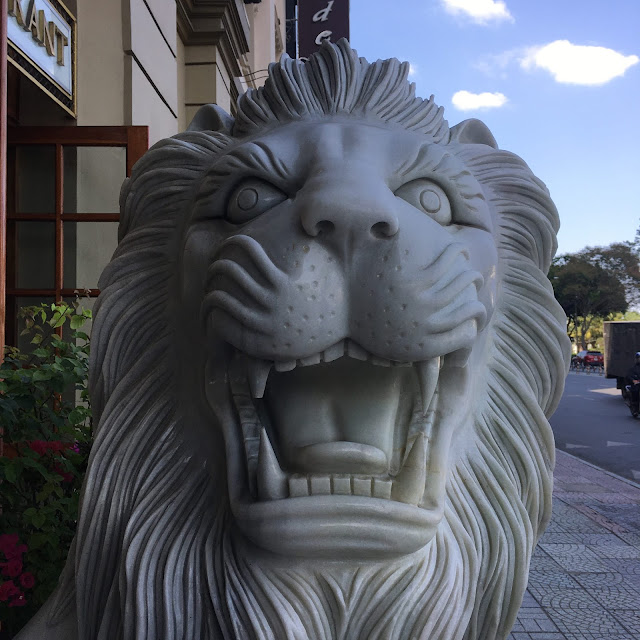 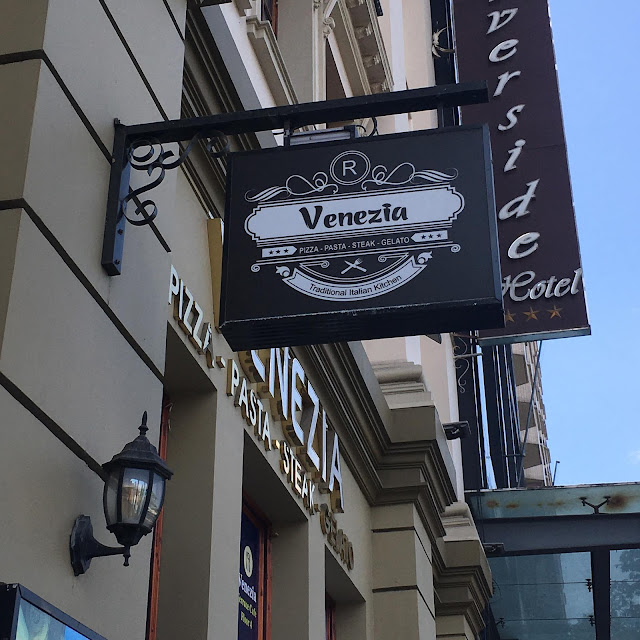 From this road junction we turned North West along the river and walked until we reached the next Junction. Here we turned along the inside of the road and passed the Vietcom Bank Tower outside of which we found a rock placed decoratively near the entrance. On the rock was carved a stylistic rendering of the building along with the building’s name in red. The large rock, accompanied by several smaller pebbles could perhaps be a relic discovered and dragged from the river or from the sea beyond. 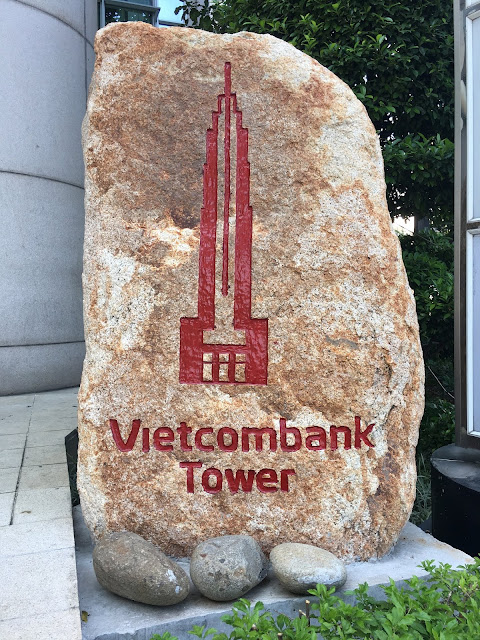 At the same junction facing onto the waterbus station we found the area deep in transformative construction work. One area was being used for temporary storage of street-cleaning equipment. One such garbage truck had been left upside down. Within the syntax of our current line of thought, we immediately saw the detached wheel-house of a sailing ship. Within a split second this area became a shipyard with its associated fragments of ship components scattered around. 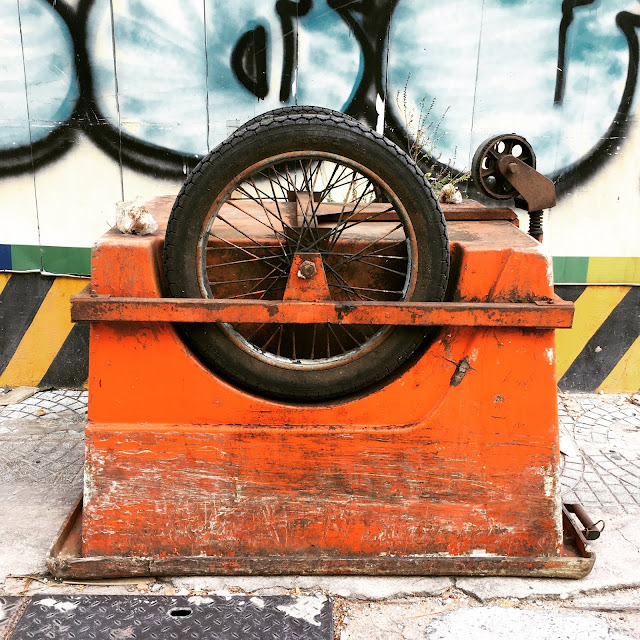 Not far from our discovered 'shipyard' the area is overseen by the dominant statue of 13th century military leader Tran Hung Dao. These days he stands commandingly on top of his pedestal, surrounded by a protective moat, perhaps overseeing his fleet. 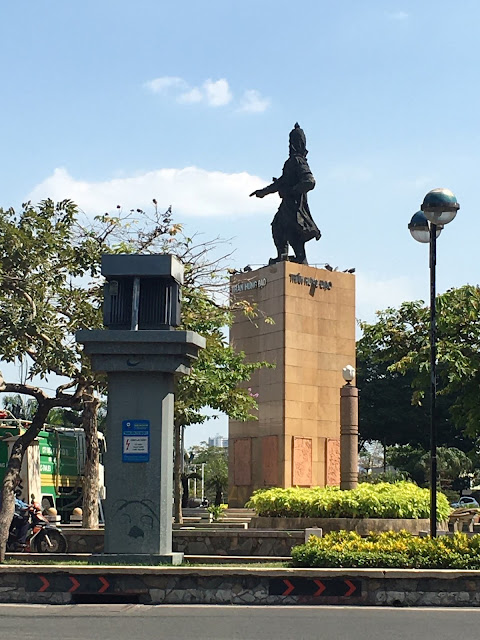 After following this road we turned into the road Thi Sach in order to make our way back towards the site of the old citadel. This street is probably not the exact line of the old canal but after attempting to transpose the canal locations onto a current map I found that the closest road is actually blocked, removing the possibility of tracing the route continuously. We therefore decided to shift the route slightly to allow a continuous perambulation.

Along Thi Sach we found the inescapable Hollywood reference to Vietnam. Such an apocalyptic welcome, combined with a dark interior did not tempt us inside on this lovely, bright day. Above the entrance I noticed the familiar Taoist symbol attached, similar to the Pak Kua mirrors that can assist in reflecting bad energy away. However, this symbol appears to have been placed upside down when compared to the usual configuration. A fitting symbol to accompany an apocalypse? 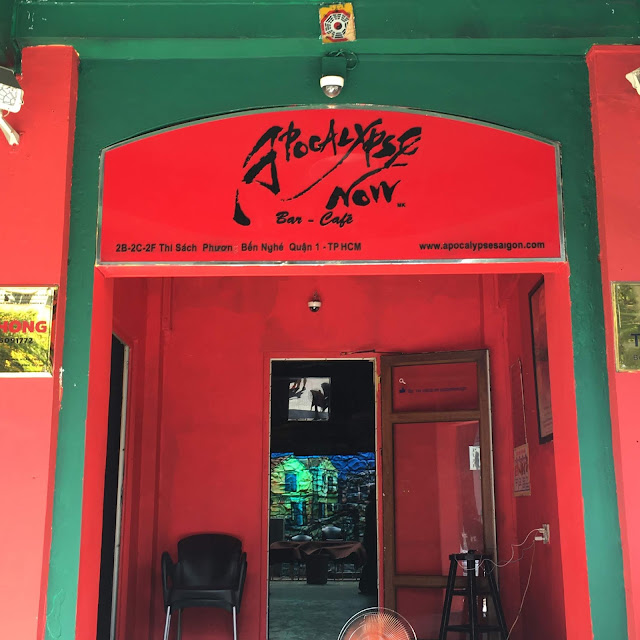 Even in the most disrupted, less-frequented, parts of the street some artistic soul has imparted a friendly sign to greet passers-by. Despite the mess caused by the nearby construction site, a simple drawing can elicit a smile. 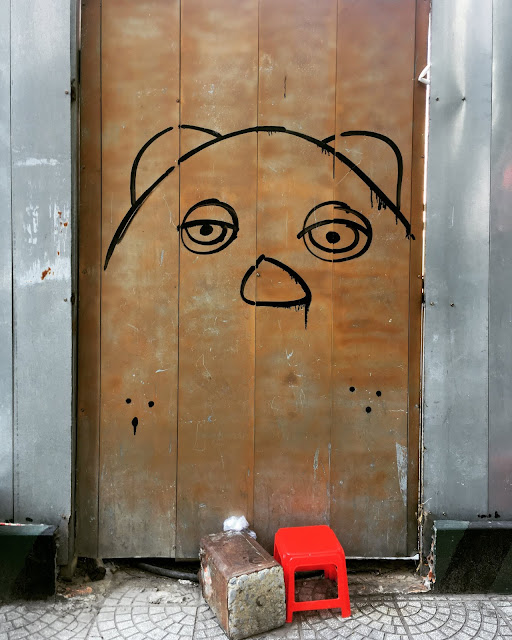 This bar / restaurant has employed a barrel motif for its entrance. More symbols of celebration, wine drinking...although the scale of this barrel also suggests the hull of a wooden ship, maybe laden with a precious cargo of Bordeaux or Burgundy wine? 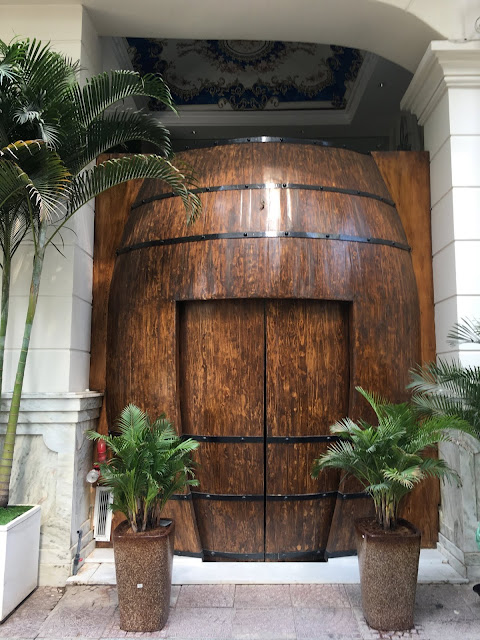 It's good to keep track of the days if your work has a fixed schedule. Most offices have a calendar of some sort. Here we found a calendar attached to a tree. Could this be a make-shift office? The date is correct, which means someone conscientiously keeps the calendar up to date. Good work! 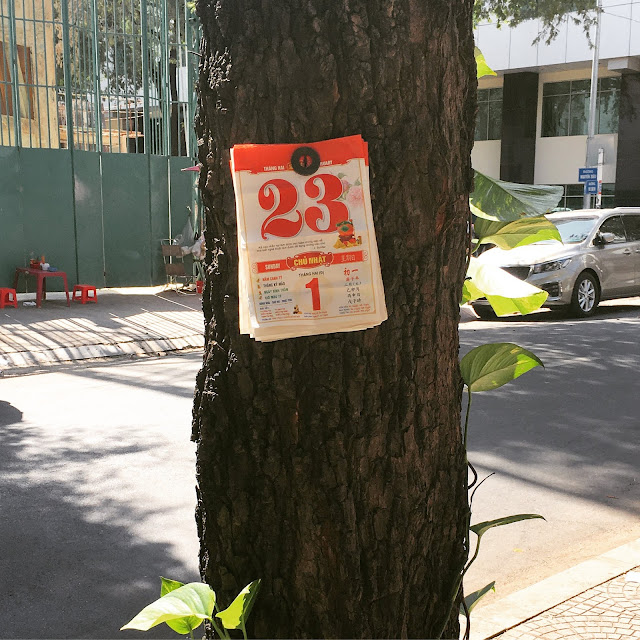 Around lunchtime it's pleasant to seek refuge in the shadows, and even better if you bring your own hammock. A relaxing street-corner hammock underneath an appropriate sign; the sleeper even wears a mask to ward off any coronavirus which may sneak up while he sleeps. 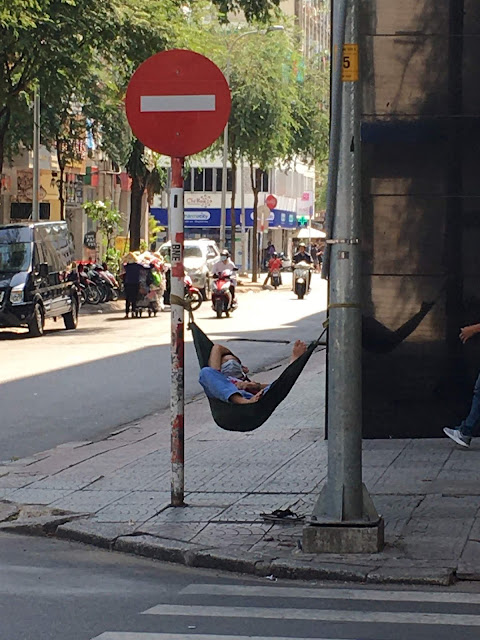 Our walk approaches its end and its time for refreshment. We could have a coffee or a beer here. The bar name seems to sum up the essence of beer drinking quite succinctly. 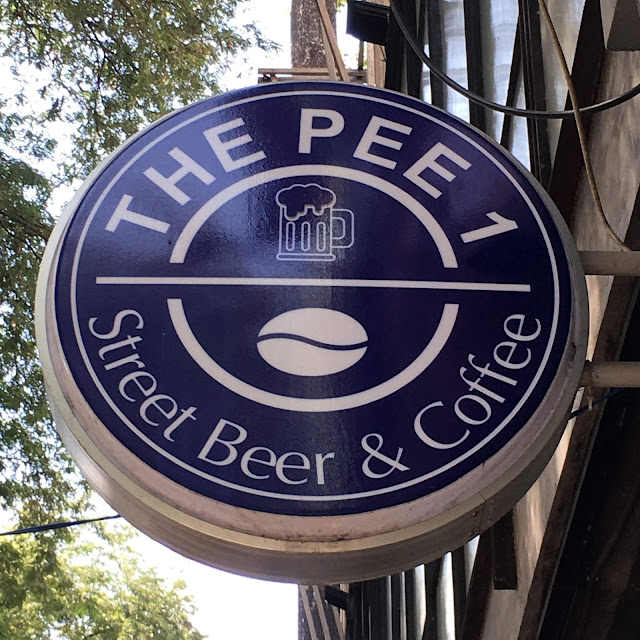 Our Terminalia Festival walk 2020 came to a close as we made our way back to the start close to the City Hall. Similar to our experience last year, the walk has encouraged us to engage more with the city, and not just with its landmarks. Every pebble, sign, quick-fix solution, pile of detritus contains a story within. It simply requires patience, an open mind and a poetic approach to life.

A period of reflection as we eat lunch, a break and then what? Where shall we walk next?