Following an opportunity presented to me by my friend John Batten, local art critic (see:http://www.aicahk.org/eng/about.asp), I was invited to write a short opinion piece for the weekly magazine section of the Hong Kong publisher Ming Pao.

I decided to write about something I have noticed happening in Hong Kong since my arrival here in 1993, namely the disappearance of the vernacular street buildings that featured open colonnaded walkways at street level that offered shelter from the sun and the rain. The open street-level arcades blurred the distinction between indoors and outdoors and displayed a consideration for the general public that is rapidly disappearing.

I enjoyed writing this article very much and I hope that I will have further opportunities in the future.
Here is the English Language version: http://www.abhk.org/the-disappearance-of-urban-comfort/

"I still have strong memories from my youth in Leeds, a city in northern England when, caught out in a rainstorm during a shopping trip (a frequent occurrence), I dodged into one of the Victorian arcades in the city centre that have since been combined into the ‘Victoria Quarter’ shopping district. Here it was possible to continue shopping or to take a cup of tea safe from the downpour. What a wonderful experience it was! The arcades were similar in appearance to the Burlington Arcade near to the Royal Academy in London, except that the shops were much more affordable.
In fact many cities in the West wisely built covered shopping arcades or colonnaded pavements, one notable example being the famous arcades in the Italian city of Bologna where there are around 40 kilometers (25 miles) of covered walkways in a variety of styles that allows pedestrians to reach every part of the city centre. In fact streets featuring continuous open arcades are expressions of the ancient Hellenistic city that was intended to improve urban comfort.
Many years later when I arrived in Hong Kong in May 1993, I discovered that the old buildings of Hong Kong had similar continuous open arcades providing a different type of covered shopping experience and one uniquely suited to the local climate. During those first few months in the city I learnt what Summer rain could be like in Hong Kong and how pleasant it was to walk the streets under the cover of the overhanging buildings that were supported at intervals by columns. This was a design perfectly in tune with the climate and culture of Hong Kong. Whether it was originally designed with this community-based concept in mind or not, that is what developed. This was surely providing the same kind of urban comfort that the classical Greeks of Athens also enjoyed. The covered walkways of Hong Kong provided shade from the blistering sun and shelter from the bouncing rain.
However, not so long after arriving I noticed that these old buildings were disappearing. One or two lucky examples were retained and reconverted into up-market bars and restaurants but many were demolished, and what was erected in their place? More often than not it was a modern, efficient, glass block tower that emphatically made a different kind of statement. The urban comfort was locked away safely inside and there was a very explicit separation between those on the inside and those outside. You are either inside enjoying the comfort, protection and cool air (or warmth in winter) or you are outside at the mercy of the elements.
This does not embody a community-based, humanist approach to urban design; it embodies the opposite: exclusion and separation. The traditional, vernacular street architecture presents a friendly face; the new vision seems decidedly mean in comparison.
These buildings also serve to represent the culture of the city. This culture is what draws visitors here, eager to wander around a city quite different from their own. What a terrible tragedy to erase this valuable characteristic.
As a footnote I have recently read of plans to remove the trams from Central, can this be true? These trams are just as much a part of Hong Kong’s unique culture as the vernacular architecture with the wonderful ‘corner buildings’, and yet they are also more than that. They are a viable mode of public transport. One journey on a tram will illustrate perfectly that they are not filled by tourists taking photographs (although that is certainly an attraction for them), they are full of local people shopping and/or travelling to or from work at a very affordable cost. 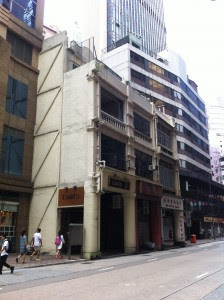 The published Chinese Language version was translated by MingPao staff.